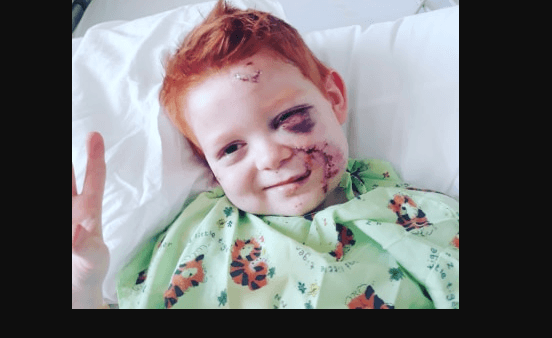 A six year old boy from Walnut is recovering after a pit bull attack last week, according to the child’s mother Jennifer Hopkins.

According to Hopkins, they were at somesone elses home and her son Trey was running and fell into the pit bulls area last Friday where he was attacked. Walnut EMS made it to the scene first, and they had the following to say:

Walnut Fire Department responded Friday to a call we never like to hear! This little man was attacked by a pit bull. We rendered aid until EMS could arrive. He was air lifted to LeBonheur Children’s Hospital. We are so glad he’s home & doing well.

According to the child’s mother, Trey had to have reconstructive surgery because his whole cheek was gone and you could see all way into his mouth.

All in all, Trey is recovering well, but the shock of seeing him at first was almost too much to bear.

“They wrapped him up on scene and when they unwrapped him at Le Bonheur I almost fainted,” Hopkins said.