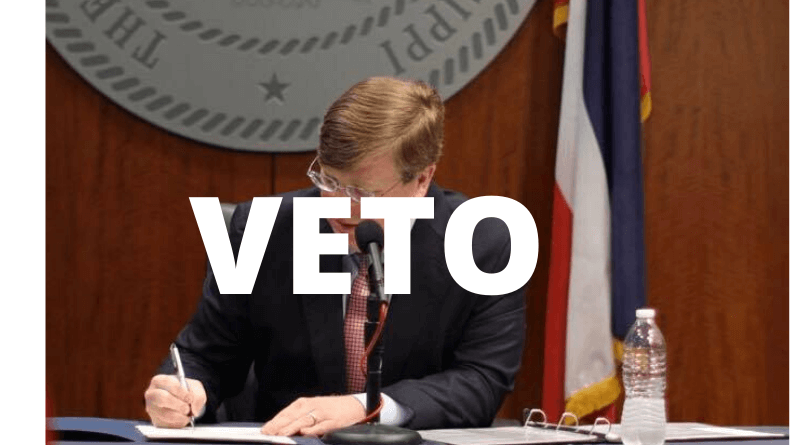 Tate Reeves announced that he vetoed several Mississippi bills that made its way to his desk to be signed after passing the House and Senate recently.

Two of the major ones that were vetoed were the education bill for the upcoming year and the Mississippi Parole bills.

The first veto is the bulk of the education budget. That may surprise people, but I will tell you why. The legislature voted to cut a teacher pay program by $26 million. It would cut teacher pay by $26 million. 23,157 Mississippi teachers would get money that they’ve earned taken out of their pockets.

It was done quietly, without much or any conversation. Pretty much nobody in the legislature or education community knew about it until we discovered it in our bill review process this week and raised the alarm. We have to veto this so that they can come back and fix it—otherwise 23,157 teachers will get a pay cut.

This is a program that has been instrumental in improving our state’s education system. It gives additional pay to teachers in schools that are highly rated or improve a letter grade. Thousands of Mississippi teachers rely on it—from Barack Obama Elementary in Jackson to Harper McCaughan Elementary in Long Beach. They’ve already earned it. This is for grades they’ve already achieved.

I want to be clear: The legislature did not cut this teacher pay program by $26 million to save money. They moved it into a different fund that gives administrators control over it. That fund increased by $40 million. The philosophy is: it should be re-distributed throughout so that everybody gets a small piece, rather than rewarding success.

They’ve pushed this change for years. It’s always a debate. This time, they got it done behind the scenes. People from both parties support and oppose the program. Yesterday, a liberal Democrat Senator bragged on Twitter that “GOP legislative leadership ended this failed program.” Many other legislators have said they had no idea they were voting to cut this pay. I think it’s probably a mix. It definitely never got a real debate.

After I’ve vetoed the bill, the legislature has a chance to come back and override my veto—locking in a teacher pay cut. Or they can sustain it and fix this. I suspect most legislators didn’t realize that they were voting to cut teacher pay, and they will fix it. I believe they can get it done in a special session as soon as the legislature is finished with their quarantine due to the high number of COVID-19 cases that spread there.

Until then, the department of education will continue to function. The bulk of the agency will run in the short term by a letter from me, backed up by an AG opinion, stating that they constitutionally have to perform their duties until the legislature can fix this.

I also had to veto House Bill 658 and Senate Bill 2123. The proponents call these criminal justice reform bills. I’ve been in favor of significant criminal justice reform bills in the past. I’ve helped make sure they become law. In fact, I signed a different one today that helps provide for better reentry into society after imprisonment. I’m generally sympathetic to the arguments. These individual bills go too far.

Right now, under Mississippi law, you can erase one felony from your record after a few years. One of these bills says that criminals can get three separate felony incidents erased from their record. To me, that goes too far. We can’t have career criminals walking around with no records. The law enforcement community that I spoke with agreed.

The same goes for Senate Bill 2123 – well-intentioned but too far. For example, it says a criminal can get parole if they’re convicted of crimes that could get them the death penalty but they get sentenced to life imprisonment instead. Another example: Right now, you’re eligible to get out of prison at 60 unless you’re a trafficker, habitual offender, or violent criminal. This totally eliminates those protections. I got countless calls from law enforcement and prosecutors about the risk it creates.

Contrary to what some will say, this was not a conservative reform effort. While some of my friends and good people supported it, two-thirds of Republicans in the Senate voted against it. That says something to me.

If they want to try again, I’ll listen. This was not the right approach.

I know that I’ll get attacked and protested for this. In a time when efforts to “defund police” and “dismantle the criminal justice system” are part of the discussion, they’ll probably try to paint any effort at law and order as the radical position. It’s all part of the job—this is the right thing to do.

There were a few more small vetoes. I had to veto one bill that I love. The intent is perfect—allowing skills training instead of traditional education. It just goes a little bit too far by conflicting federal law. Because of that, it put federal dollars for skills training at risk. I will work hard with the legislators to get it done in a few months! Great goal—just needs a few tweaks and we can get it done!

There was an earmark to give $6 million of CARES Act funds to a cherry-picked corporation to address disparity. That kind of work is necessary. If they gave it to the health department that’d be fine. But there’s no justification for slipping it to handpicked interests and letting them dole it out to others for a vague mission. There has to be accountability. They earmarked $2 million from the CARES Act for a business deal with a Tate County hospital that has been closed since 2018–how does that have anything to do with COVID-19? They’ve been closed for two years!

I signed the rest of their bills—they passed hundreds. Lots of good things in there! A few I let go into law without my signature because I didn’t love them—lots of earmarks for special projects—but didn’t feel like they rose to the level of a veto.