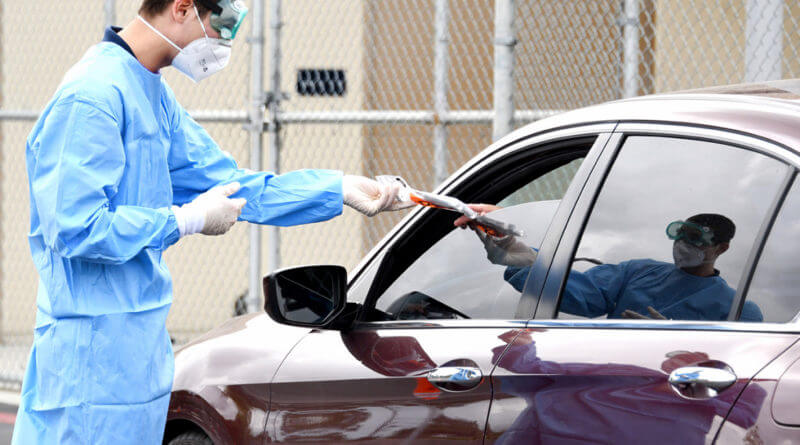 Coronavirus testing is commonly an unpleasant, even painful experience in which a health care provider pushes a torturously long swab up your nostril. President Donald Trump declared that submitting to the process was “a little bit difficult.”

Since late March, three Southern California jurisdictions ― Los Angeles County, and the cities of L.A. and Long Beach ― have offered a more palatable alternative to this nasopharyngeal sampling, whose very name poses a challenge. At 21 drive-thru sites, anyone can now provide a sample by swishing a cotton swab around their mouths, putting it in a tube and dropping it in a receptacle on their way out — all within the comfort of their cars. Some experts suggest this self-sampling approach may provide an easier way to ramp up massive testing in the U.S.

“I strongly advocate for the oral self-swab,” said Dr. Clayton Kazan, medical director for the L.A. County Fire Department, which is overseeing the county’s drive-thru testing program. “It may or may not be inferior, depending on the study you read, but, logistically, there is no comparison.”

But many public health officials balk at relying on the simpler tests unless scientific data convincingly shows they work as well as the accepted methods.

“I have real concerns about decisions that are made based on studies that have not been peer-reviewed,” said Dr. Richard Besser, CEO of the Robert Wood Johnson Foundation and former acting head of the Centers for Disease Control and Prevention.

“In the middle of this pandemic, we don’t want to compromise, especially if people are going to use that information to decide if they’re going to follow social distancing,” said Dr. Adam Jarrett, chief medical officer at Holy Name Medical Center in Teaneck, New Jersey.

Nasopharyngeal samples have long been standard for diagnosing influenza and other respiratory infections because the pathogens are known to colonize the upper part of the throat behind the nose. In contrast, the simpler method being used in L.A. County — in which patients are asked to cough and then swab their cheeks and the back of their mouths — is based on a limited body of emerging research.

Scientists and public health experts have promoted increased viral testing and surveillance as key to any strategy for safely loosening societal restrictions — and the need to collect nasopharyngeal samples by professionals dressed in protective gear represents a major obstacle. That’s why interest is rising in the use of oral samples as well as nasal swabs that can be self-administered, said Lisa Barcellos, an epidemiologist at the University of California-Berkeley.

“It’s impossible to scale up anything that requires health professionals to do it, and with equipment that’s hard to get,” Barcellos said. The surge in demand for the specialized 6-inch swabs required for the nasopharyngeal procedure has led to critical shortages, she added.

The L.A. County, Los Angeles and Long Beach drive-thru sites — designed for people experiencing symptoms — collectively process about 7,000 oral swab tests a day, with a positive rate of just over 7%, according to Curative, the diagnostics company that provides the tests. Curative is holding discussions with jurisdictions in other areas and last week announced an agreement to test Air Force personnel.

Kazan acknowledged that nasopharyngeal sampling is considered the most trustworthy method but noted recent studies have reported promising results from oral samples. Moreover, he said, relying on self-administered techniques eliminates the danger to health care personnel and minimizes the need for personal protective equipment in short supply, like masks, face shields and protective suits.

Kazan said people who receive the tests are relieved to find that collecting secretions from their mouths is relatively quick and easy.

“I think that a lot of folks envision what they saw on YouTube, people in PPE that look like astronauts putting swabs way up people’s noses,” he said.

But to be useful, diagnostic tests must be accurate. A “false negative,” in which the test fails to detect the coronavirus, could lead someone who is infected to think they are safe and pose no danger to others.

Since the pandemic began, a growing body of research — some of which has not yet undergone peer review — has compared how accurately different sampling techniques detect the virus. “Everybody’s looking for better ways to do this,” said Barcellos, who is involved in a major study of the prevalence of coronavirus infection in the East Bay region.

Both oral and nasal samples can be obtained in more and less invasive ways. Oropharyngeal swabs require the instrument to be inserted down the throat; like nasopharyngeal swabs, they are supposed to be performed by a trained provider because the procedure can be uncomfortable and tends to produce a gag reflex.

And swabs of secretions gathered from just inside the nostril can be self-administered, unlike the nasopharyngeal swabs. A Seattle study of hundreds of coronavirus patients found that self-collected samples were almost as accurate as nasopharyngeal swabs in identifying viral infections. In March, Seattle public health agencies launched a home-testing surveillance project using the nasal self-swab, with local residents registering online.

On April 21, the Food and Drug Administration awarded its first authorization for a nasal self-swab home test, made by LabCorp. The agency had previously issued warnings to consumers about “fraudulent” coronavirus home test kits being marketed online.

The emerging research has also investigated oral fluid tests, like those being conducted in L.A. County, with subjects generally required to cough in order to bring up virus-rich saliva before they swab their mouth or spit into a container. A non-peer-reviewed study of 65 patients in China reported that the detection rate of the novel coronavirus was higher in saliva than in other respiratory samples. Other studies have found that oral fluid tests aren’t as accurate when people are not reminded to cough beforehand.

But “a nasopharyngeal swab is a standardized sampling technique that’s been done for decades,” said Burnham, who is also a professor of immunology and pathology at Washington University School of Medicine. “Saliva, oral secretions — that’s not a standard way we’ve looked for respiratory viruses, and right now everyone’s doing it a little bit differently.”

That makes it harder to compare studies and results, she said.

The FDA’s authorization for the Curative test recommends that the self-collection process be “observed by a trained healthcare worker.” Kazan, the fire department medical director, said that trained staffers observe the oral self-swabbing. While acknowledging the limitations of the early data, Kazan insists that the needs of the moment are paramount.

“This is the space between smart people reading medical literature and those of us who are tasked with operationalizing these recommendations,” he said.