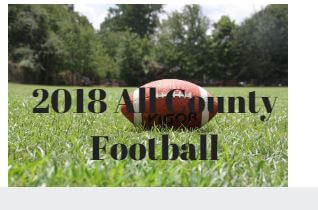 With the football season firmly in the books, here is your 2018 Tippah County Sports All County Football Team. If you missed it yesterday, here is your MVP, Offensive and Defensive player of the year.

Athlete of the Year

Khris Perry, Walnut- Perry scored on rushing, receiving, defense and speical teams this year. He also did this.

Kevin Hurley, Walnut- 2 way player of the year. Hurley was the Region Offensive Player of the year and he was a terror on defense. He also was the All County Punter and a Kickoff Specialist.

Jamal Brooks, Ripley- Brooks was all region on offense and defense and the Tippah County sports defensive MVP.

Trey Blanchard, Ripley- Blanchard was all-region on defense, lined up at running back, quarterback, linebacker and defensive back for the Tigers.

Elijah Moore, Falkner- Moore scored rushing, receving and a kikoff TD this season while playing the majority of his teams snaps at safety on defense.

Jeremiah Mitchell, Falkner- The sophmore was his teams primary center and held down the trenches on defense, registering 36 tackles and 3 sacks