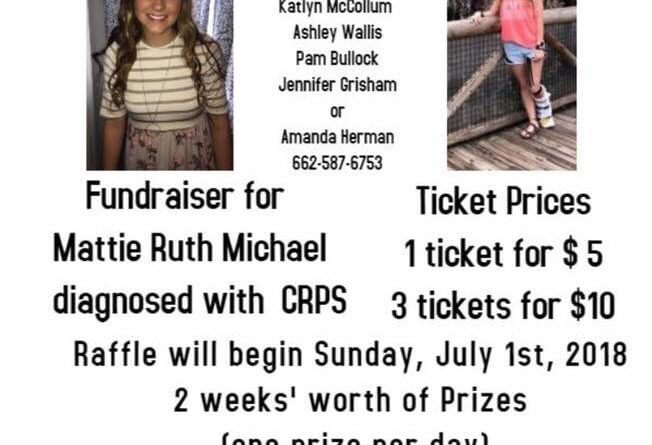 Mattie Michael, a student at Pine Grove, has been dealing with CRPS (Chronic Regional Pain Syndrome) in her leg for nearly a year. Her friends and family are holding a raffle in support of her.

Mattie is a member of the Pine Grove softball and basketball program and has been sidelined after an injury that has progressed to CRPS.

On October 2, 2017, Mattie Ruth suffered a high ankle sprain, torn tendons and ligaments.   Since that date she has not been able to walk without crutches and some sort of boot and she been through several.  Mattie Ruth was diagnosed with CRPS (Complex Regional Pain Syndrome) in December. CRPS (complex Regional Pain Syndrome) has several definitions when you start researching.

Complex regional pain syndrome (CRPS) is a chronic (lasting greater than six months) pain condition that most often affects one limb (arm, leg, hand, or foot) usually after an injury. CRPS is believed to be caused by damage to, or malfunction of, the peripheral and central nervous systems.

The raffle will begin July 1st and run daily for two weeks.

There is also a GoFundMe set up. You can donate Here