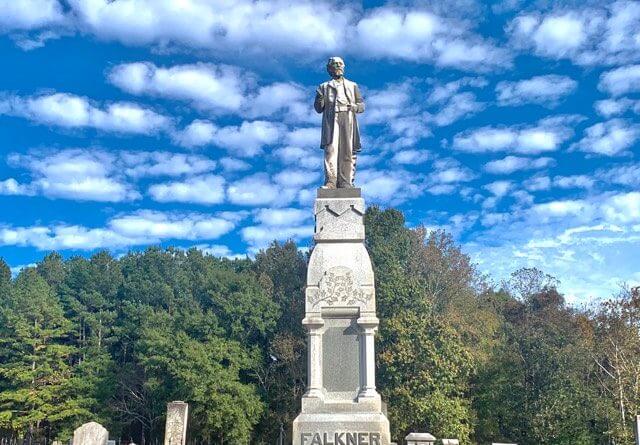 Tuesday is the 130th anniversary of arguably the most infamous murder in Tippah County’s history.

From Jack Elliott, former Historical Archaeologist  at the Mississippi Department of Archives:

The following account appeared in the Ripley Advertiser the following day. Although unsigned it was almost certainly written by Richard F. “Dick” Ford, the newspaper’s editor. The Advertiser office was located on the southeast corner of the intersection of Commerce and Jefferson Streets in Ripley, that is just off the southeast corner of the square, so you can visualize where Ford was when he went to the door and looked across the square to the scene of the shooting. .:

About 4:30 yesterday we heard the report of a pistol on the west side of the public square; we went to the door and looking out, saw a crowd gathering, and upon inquiry learned that Col. W.C. Falkner had been shot by Mr. R.J. Thurmond. In answer to the question as to the cause of the shooting, we were told that there was no known cause–that Col. Falkner was standing on the pavement in front of or near Alexander & Co.’s store, when Mr. Thurmond met up with him, and pointing his pistol at Col. Falkner’s head, fired, without any apparent provocation…. Mr. Thurmond was arrested soon after the shooting by [Sheriff] Capt. Rutherford, and lodged in jail. If he had any cause for committing the act he has made no statement of it so far as we know but has kept it to himself. It is well known, however, that an old feud existed between the parties—that neither one had any love for the other. But as the matter will no doubt undergo legal investigation, we do not propose to make any comment upon it one way or the other.
Col. Falkner and Mr. Thurmond were two of our wealthiest and most prominent citizens, and the unfortunate affair is deplored by all good citizens.
Ripley Advertiser, November 6, 1889″