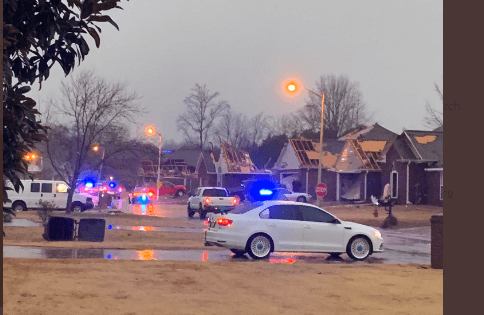 Numerous homes and a church were completely destroyed as several confirmed tornadoes ran through Mississippi on Monday.

The large cell of storms made its way throughout the Magnolia state starting early Monday, with the worst damage so far being reported in Guntown.

I can confirm a tornado has touched down in Guntown, Mississippi. So far, we know about 35 homes were severely damaged on Colt Lane and one church was completely destroyed. It is my understanding the church building was unoccupied.

Let me thank the 1st responders for their response time. Chief Michael Hall’s Police department and Fire Chief Larry Mccoy volunteer department should be commended on how quickly their team members responded to the needs of the residents.

Guntown City Councilman Brent Lindsey was also on the ground helping and assessing the damage.

It is also important to note representatives from the American Red Cross were on site within 30 minutes.

It was awesome to see neighbors helping neighbors. The salvage and rebuilding has already started.

I was able to personally view the damage and I have updated the Governor’s and the Lieutenant Governor’s office. I will be traveling throughout the district this evening and in the morning talking with neighbors and seeing how we can help.