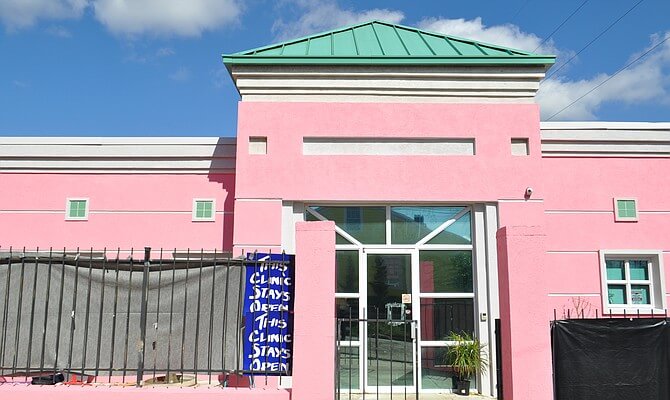 Mississippi’s only abortion clinic still open, but a legal battle could be on the horizon

This store was originally published on MississippiToday.org

The sole abortion clinic in Mississippi is open and accepting appointments while fully complying with state orders about COVID-19, according to an organization that represents the clinic in legal matters.

The Jackson Women’s Health Organization became a focal point of the state’s coronavirus response this week after Gov. Tate Reeves signed an executive order banning all elective and non-urgent surgeries and procedures until April 27. Reeves said the move is intended to slow the spread of the virus and preserve protective gear for health workers.

But the order raised questions about how elective surgeries are defined and whether that definition includes abortions.

Specifically, the executive order states that licensed health care professionals and facilities, “shall postpone all surgeries and procedures that are not immediately medically necessary to correct a serious medical condition of, or to preserve the life of, a patient who without immediate performance of the surgery or procedure would be at risk for serious adverse medical consequences or death, as determined by the patient’s physician.”

In addition, the order states that it would not apply to procedures that do not “have the potential to deplete the hospital capacity, medical equipment or PPE needed to cope with the COVID-19 disaster.”

It was not immediately clear how abortions fit into the governor’s order. When a reporter pressed Reeves at a recent press conference on whether his order explicitly applies to abortions, Reeves only repeated the phrase, “It shuts down all elective surgeries.”

A spokeswoman for the nonprofit Center for Reproductive Rights, which has represented the Jackson clinic in lawsuits about recently passed anti-abortion laws, confirmed that the facility continues taking appointments. The center’s attorneys declined to comment further. Calls to the clinic, located in Jackson’s Fondren neighborhood, were not returned.

The Mississippi State Department of Health had already asked clinics to postpone elective surgeries and non-urgent appointments in mid-March to, “protect patients and health care professionals by minimizing potential exposure to COVID-19 and preserving valuable protective equipment.” But, at the time, the agency advised that clinicians were responsible for determining the necessity of each procedure.

Meanwhile, as states across the U.S. started preserving hospital beds and personal protective equipment for COVID treatment, the American College of Obstetrics and Gynecology issued a statement urging states against lumping abortion care with other procedures.

“While most abortion care is delivered in outpatient settings, in some cases care may be delivered in hospital-based settings or surgical facilities. To the extent that hospital systems or ambulatory surgical facilities are categorizing procedures that can be delayed during the COVID-19 pandemic, abortion should not be categorized as such a procedure. Abortion is an essential component of comprehensive health care,” the statement reads.

“It is also a time-sensitive service for which a delay of several weeks, or in some cases days, may increase the risks or potentially make it completely inaccessible. The consequences of being unable to obtain an abortion profoundly impact a person’s life, health, and well-being.”

Most abortions in the state happen early in the first trimester and most are medicine-induced — through pills — rather than surgical. More than 90 percent of abortions in Mississippi in 2016 were performed before 14 weeks of gestation and 65 percent were before 9 weeks, according to the U.S. Centers for Disease Control and Prevention’s most recent data.

More than a quarter of abortions in the U.S. are medically delivered rather than surgically, while almost two-thirds of Mississippi’s abortions are delivered this way.

In recent years, the clinic has been at the center of several efforts of Mississippi’s Republican-led Legislature to more heavily restrict abortion in the state. Most of the bills have been struck down by federal courts because they violate the constitutional right to abortion granted under Roe v. Wade.

Reeves, who has championed anti-abortion legislation throughout his political career, has called for abortion access to be restricted during the coronavirus pandemic. In late March, Reeves vowed that his administration would take “whatever action we need to protect not only the lives of unborn children but also the lives of anyone who may contract this particular virus.”

Judge Reeves, who previously blocked the state’s six- and 15-week abortion bans that are still winding through the federal courts, sent a letter to attorneys for the state and the clinic asking the state health officer to clarify whether elective surgeries apply to abortions.

Reeves — no relation to the governor, the judge noted in his letter — pointed to a similar order in Alabama, which would have also prohibited abortions. A federal judge there ruled that the state could not block abortions after Alabama’s health officer clarified that doctors should have ultimate discretion over a procedure’s necessity.

Thomas Dobbs, Mississippi’s top health official, told reporters Tuesday that he had not received Judge Reeves’ letter, adding the executive order applies to all ambulatory surgical centers. The health department regulates these 75 centers across the state, which specialize in same-day outpatient surgeries such as some knee surgeries, cataract procedures and biopsies. Dobbs added that his agency is preparing to issue guidance to these facilities about elective procedures.

“We’ll send out some guidelines that basically make sure that they (ambulatory surgical centers) understand what’s in the executive order and we will send them to every regulated ambulatory surgical center and expect for them to comply. That should be forthcoming pretty soon and we’re going to be evenhanded with everyone who falls under that regulatory scheme,” Dobbs said Tuesday.

The Jackson Women’s Health Organization is not licensed as an ambulatory surgical center, but as an abortion facility.

In 2012, the clinic sued the state to reverse several targeted regulations, including an “admitting privileges” requirement that abortion providers have a formal relationship with a local hospital to admit patients during an emergency. The clinic sued claiming the restriction was medically unnecessary and unconstitutional. Reproductive rights advocates and medical experts have called admitting privileges regulations harmful and restrictive, noting procedures with higher complication rates, like colonoscopies and liposuction, are not always restricted in the same way as abortion. They also cite that abortion has comparatively low complication rates.

The admitting privileges law was ultimately struck down. The case also renewed attention to restrictions conflating clinics’ licensure that was previously ruled unconstitutional. Jackson Women’s Health is not licensed as an ambulatory surgical clinic but does have to meet “minimum standards of operations” of such facilities. The clinic’s lawyers are still challenging the licensing mandate in the state’s ongoing federal legal lawsuits.

After abortion-rights groups sued over that state’s pandemic abortion ban, the 5th U.S. Circuit Court of Appeals ultimately ruled Monday that medication abortions, which are not considered procedures, could continue. Surgical abortions would be prohibited except for women who would not be able to have an abortion under Texas’ 20-week ban if they delayed the procedure.

The Jackson clinic does not perform abortion past 16 weeks, so the courts may have to sort out whether women in Mississippi would be granted a similar exception.

“The Fifth Circuit Court of Appeals has just recently ruled that abortions should not be afforded a blanket exception to a Governor’s directive to prohibit non-essential services and conserve (personal protective equipment) and other resources needed to meet the health and safety needs of the people,” she said.  “And I am prepared to defend our order just as strenuously in court.”