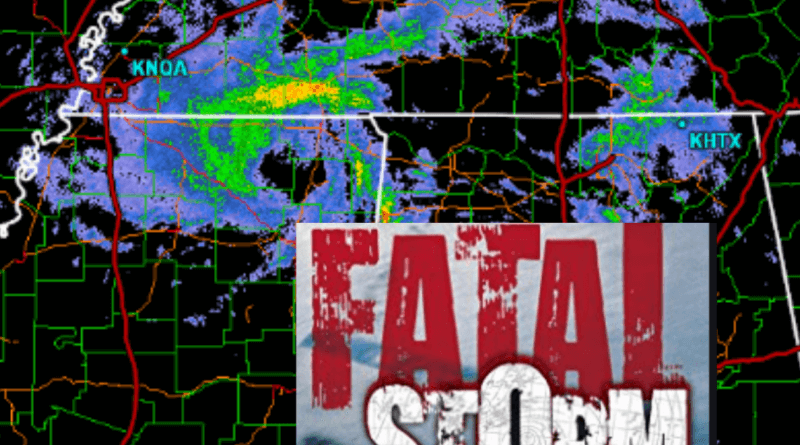 The storm that blew through the area Saturday causing widespread damage and loss of power also claimed at least one persons life.

According to the National Weather Service, here are the facts from the storm that also caused a massive power outage in the area.

Summary: Widespread damage was observed along a line from Houston, Mississippi to Camden, Tennessee on Saturday as the remnants of Tropical Storm Olga lifted through the Mid-South. Multiple structures were damaged, as well as countless trees and powerlines were downed. At least one fatality and one critical injury have been attributed to the remnants of Olga.

Setup: Tropical Storm Olga formed in the Gulf of Mexico Friday afternoon near the Louisiana coast. Olga then transitioned to a Post-Tropical Storm and merged with a cold front as it quickly lifted northeast through the Lower Mississippi River Valley on Saturday.

As Olga’s remnants moved into the Mid-South, sustained winds of 30-40 mph were reported at several sites for up to an hour as the storm passed over. The first instance of damage occurred near Houston, Mississippi, where county-wide tree damage was observed. Widespread damage continued along a north-northeast track for nearly 150 miles as it moved through Mississippi and Tennessee. Numerous trees, powerlines, and structures were damaged along the path, before Olga’s remnants moved east of the Tennessee River. Some of the most impressive winds were recorded at Tupelo Municipal Airport. Multiple wind gusts of 50-70 mph occurred for nearly 45 minutes as Olga moved through. The circulation maintained its intensity as it tracked north into Corinth, MS and eventually into Adamsville, TN, where some of the worst damage was observed. Winds were estimated to be in the 75-100 mph range. Damage continued through west Tennessee along the Tennessee River and eventually crossed over Interstate-40. Several semis were flipped along the interstate as winds remained very strong. Damage continued into Camden, Tennessee before crossing the Tennessee River.