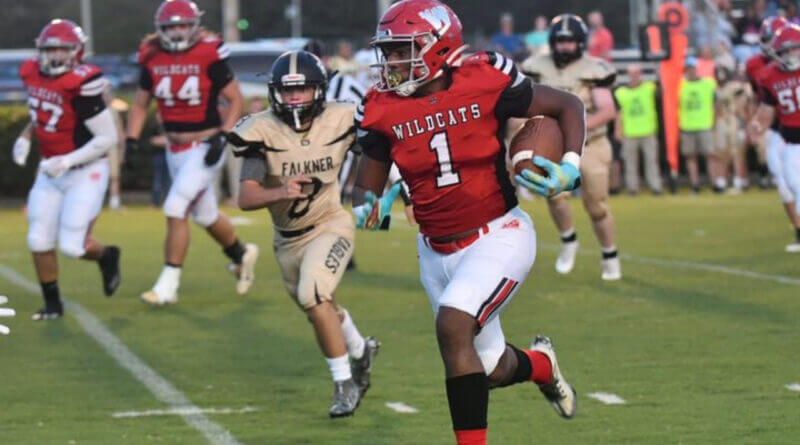 WALNUT–Wildcats sophomore running back Kemarrion Gray’s found a hole and galloped 33-yard yards to the Falkner 3-yard on the third play of the game in the 20th Joe Bowl. And it was definitely a sign of things to come.

Gray added three more scores on 25 rushes for 141 yards as Walnut rolled Falkner 36-8 in front of a home crowd. It was the fourth straight Joe Bowl win for Walnut, who led 30-0 at the break.

His final score was a 20-yard sprint down the Eagles’ sideline on a double-reverse at the 2:45 mark of the third quarter. It came on 4th-and-3 and Gray was pretty confident about the result of the play when he heard it.

“When the play came in, we all knew it was a “house call,” said Gray, who for the second week in a row surpassed the 120-yard mark with multiple “house calls.”

It was another tough Joe Bowl for Falkner, but there was at least one positive. The Eagles reached pay dirt, snapping an 11-quarter scoreless streak against Walnut when QB Gavin Wooley found Keaton Bolar on a short TD pass late in the fourth quarter.

Walnut QB Drew Jackson finished the night with eight completions on 15 attempts for 125 yards and one score, a 12-yard strike to Trenton Braddock with 3:59 to play in the opening quarter.

Walnut improves to 2-0 and hosts Middleton (TN) next week. Falkner drops to 0-2 and travels to Alcorn Central in Week 3.