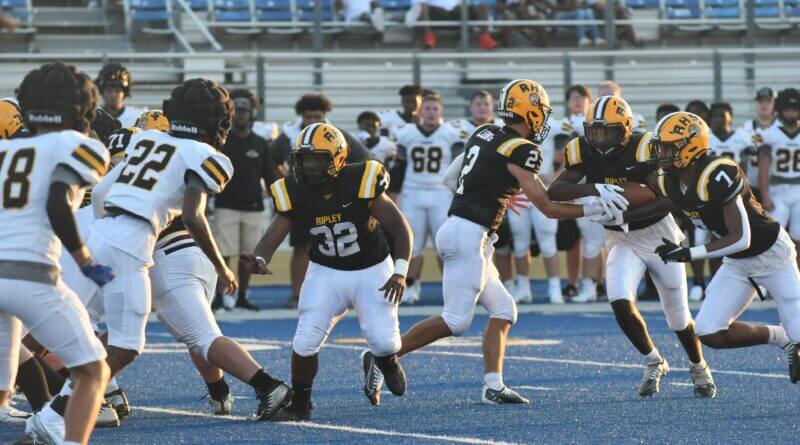 TUPELO–High school preseason jamboree games are only two-quarters long. But if the Ripley Tigers performance against the preseason-ranked No. 2 Itawamba AHS is any indication of what’s to come in 2022, the Tigers are going to be in good shape.

The Tigers offense was sharp, the defense was dominating and Ripley left the Tupelo Jamboree with a convincing 14-7 win over the Indians.

Itawamba received the ball to start the game and opened the scoring with a 40-yard TD run by Zach Harris in the first three minutes. But the Tigers bounced back with a drive of their on. Ripley marched 65 yards led by junior QB Ty Long and the downhill running of sophomore RB Jaylen Brooks. Long capped the impressive drive with an 8-yard back-corner TD pass to TE Cooper Davis.

“The main thing I thought is that they scored on us right off, but we came back and scored on them. That’s improvement from the last few years,” added Liles. “I was pleased with that comeback.”

Itawamba’s opening score would be its only highlight of the night, as a swarming Tigers’ defense settled in to pitch a shutout the rest of the way.

Ripley junior CB Michael Turner single-handedly ended Itawamba’s second drive, picking off Indian’s QB Ty Davis with a diving grab near the Ripley sideline. The Tigers wouldn’t surrender a first down or allow the Indians to pass the 50-yard line the rest of the way.

“That’s the core of our team,” said Liles. “We’ve got so many starters back, and I knew they would play like that. I just hope they keep playing like that.”

Ripley put the game away with a 2-yard TD run by senior back Keegan Colyer late in the second quarter.

The Tigers will now turn their attention to the 2022 season opener. They host Byhalia, Friday night at Tigers Stadium. Kickoff is set for 7:30 p.m.