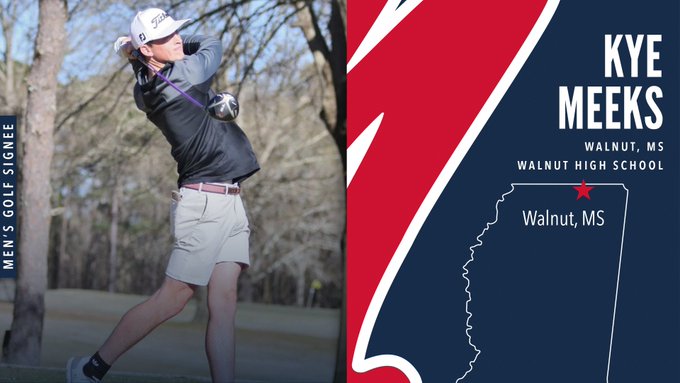 Walnut golfer Kye Meeks made his commitment to golf for the University of Mississippi official on Wednesday, signing his National Letter of Intent to the school in the early signing period.

Ole Miss and head golf coach Chris Malloy had this to say about Meeks :

Meeks will come to Oxford as the No. 1 ranked 2020 graduate in the state. For the second consecutive year, he won the MHSAA State Individual Championship this past April with a two-day score of 4-under (67-73). His 67 was the lowest round by any golfer at the state championship.

This fall, he collected two wins on the Southeast Junior Golf Tour, the Hattiesburg Country Club Junior and the Annandale Junior Classic. Meeks put together a top-3 finish at the Mississippi Junior Amateur this year along with two top-15 performances at the Press Thornton Future Masters and the Magnolia Amateur. He finished top five at the Southern Junior Championship.

“We are extremely excited to have Kye officially become a Rebel,” Malloy said. “He has been a player that we have had on our radar for a few years now and is now developing like we hoped he would. He had a tremendous summer of tournament golf, and there is no doubt that you will hear his name for many years to come as a Rebel.”