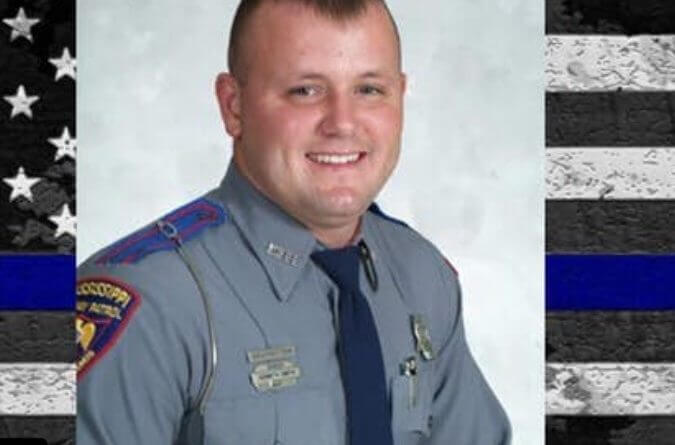 The Mississippi Legislature issued a resolution honoring Josh Smith, a Mississippi trooper who was Shot and killed last year

Today our legislators released a concurrent resolution in honor of Cpl. Josh Smith, our trooper who was fatally shot on Sept. 30. He is still very much loved and missed by both his friends and loved ones and his DPS family.

(As Adopted by House and Senate: see the complete text below)

A CONCURRENT RESOLUTION EXPRESSING THE PROFOUND SORROW OF THE LEGISLATURE ON THE LOSS OF OFF-DUTY MISSISSIPPI HIGHWAY PATROL CORPORAL KENNETH JOSHLIN “JOSH” SMITH OF WALNUT, MISSISSIPPI, AND EXTENDING DEEPEST SYMPATHY TO HIS BEREAVED FAMILY.

WHEREAS, the community of Walnut, Mississippi, lost a wonderful friend and true public servant with the passing of Corporal Kenneth Joshlin “Josh” Smith, an eleven-year veteran with Mississippi Highway Patrol Troop F, on Sunday, September 30, 2018, in service to the citizens of the State of Mississippi in Tippah and Alcorn Counties, and there is now a hush in our hearts as we come together to pay our respects to the memory of one who has been called to join that innumerable heavenly caravan; and

WHEREAS, Josh Smith, or “Kenny,” as he was lovingly referred to by his wife Chelsea, was a devoted father and husband who worked hard to provide for his family making sure their needs were met before his own; and

WHEREAS, Josh dedicated his talents to build his career working from Motorcycle Patrol to the Special Operations Group (SOG) unit and as a proud member of the Special Weapons and Tactics (SWAT) team at the time of his unfortunate demise; and

WHEREAS, Governor Phil Bryant, Lieutenant Governor Tate Reeves, Speaker of the House Philip Gunn and other elected officials attended Josh’s funeral services, along with the ranking brass of the Mississippi Department of Public Safety and numerous other federal, state and local agencies, including strong contingencies from the Arkansas and Louisiana State Police, who attended as final tribute of respect to their fallen brother in blue; and

WHEREAS, while friends and family always held a fear of the unknown that comes with a career dedicated to serving others, Josh served fearlessly and wholeheartedly, in whatever capacity he was needed to fill, which was also tantamount to the leisurely things in life he enjoyed most with his family, like fishing and hunting with his son Bryson, drinking milkshakes and riding the Razor with his little princess, “Lilly Poo,” or working on automobiles with his wife; and

WHEREAS, Governor Phil Bryant ordered State and American flags on public property flown at half-staff from sunrise October 1, 2018, until sunset October 4, 2018, to mourn the loss of Corporal Smith and the two Brookhaven Officers White and Moak, who also paid the ultimate sacrifice with their lives on September 29, 2018; and

WHEREAS, an officer and a gentleman who has laid down his flag and staff of battle to unite with the legions of Heaven’s guardians, Corporal Smith will be sorely missed by those who experienced the depth of his love, commitment and compassion for life and pursuit of freedom for all, but the legacy of his memory will forever be etched in the hearts and memories of his survivors, including: his wife, Chelsea Smith; son, Bryson Lane Smith; daughter, Lilly Kate Smith; mother, Vickie Clark; father, James Smith; siblings, Brandon Jones, Canon Hawkins, McKenzie Clark, Tonya Vick, Sharee Carter, Michelle Wilbanks and Kelly Smith; and a host of friends; he was preceded in death by his maternal grandparents, Martha Lou and Marlin Jones; and mother-in-law, Robin Follin; and

WHEREAS, we encourage the family to find solace from the overwhelming sadness created by the earthly departure of their beloved family member and be renewed in their faith that Corporal Smith fulfilled the purpose of his appointed time in adherence to the commandment of II Timothy 4:7, by having “fought a good fight, finishing his course and keeping the faith until the hour of his departure was at hand”; and

WHEREAS, we can never repay our debt to fallen law enforcement officers and their families, but we must do what we can, with all that we have, to live our lives in a way that pays tribute to their memory and heroic action, as evidenced by the life and merits of Corporal Smith, whose gift to this state was that the preservation of peace and prosperity abound for all citizens:

NOW, THEREFORE, BE IT RESOLVED BY THE HOUSE OF REPRESENTATIVES OF THE STATE OF MISSISSIPPI, THE SENATE CONCURRING THEREIN, That we do hereby express the profound sorrow of the Legislature on the loss of Mississippi Highway Patrol Corporal Kenneth Joshlin “Josh” Smith of Walnut, Mississippi, and extend our deepest sympathy to his bereaved family.

BE IT FURTHER RESOLVED, That copies of this resolution be furnished to the surviving family of Corporal Smith and to the members of the Capitol Press Corps.