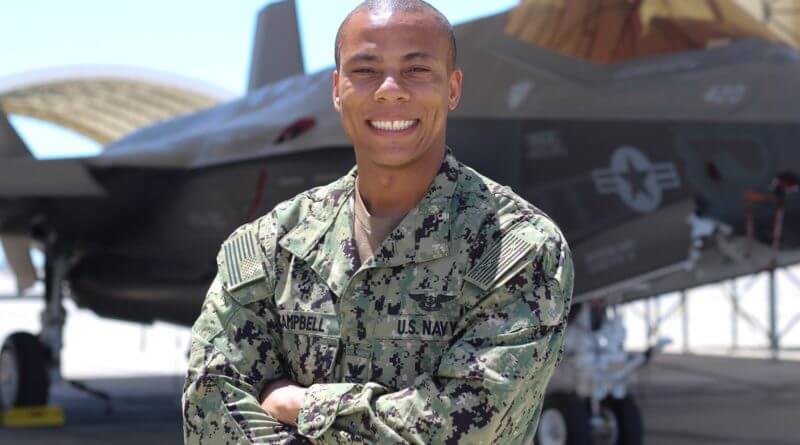 LEMOORE, Calif. – A 2001 Falkner High School graduate and Falkner, Mississippi, native is serving in the U.S. Navy with the Rough Raiders of Strike Fighter Squadron 125.

A Navy aircrew survival equipmentman is responsible for all pilots’ well-being and safety.

“I wanted to do something different growing up,” said Campbell. “Most people stay in that area. The Navy opens you up to all possibilities and teaches you not to settle for less.”

NAS Lemoore is the home of the F-35C Lightning II, which is slated to play a critical role in carrier strike groups’ integrated warfighting packages, according to Navy officials.

“Strike Fighter Wing, U. S. Pacific Fleet, based at Naval Air Station Lemoore, California, is the heart of Naval Aviation,” said Capt. James S. Bates, Deputy Commodore, Strike Fighter Wing, U.S. Pacific. “The sailors assigned to SFWP always exceed expectations and produce amazing results through team work and dedication to their department, squadron, the U.S. Navy and their family. Naval Aviation is a challenging occupation, but our sailors work day in and day out to provide fully mission capable aircraft and fully qualified aircrew to ensure leadership is able to answer national level tasking. I am humbled to be able to lead the sailors of SFWP and I am proud to call Lemoore my home.”

F/A-18 Super Hornets, with the ability to carry large payloads of advanced weapons, will continue to provide lethality and flexibility to complement the capabilities of the F-35C Lightning II. This combination of naval aviation assets will provide a mix of strike assets to deliver responsiveness and firepower across the range of military operations, according to Navy officials.

The F-35C will serve as the first stealth platform to operate forward from the sea, extending combat power in all threat environments and reducing the Navy’s reliance on supporting aircraft, tankers and jammers while enabling joint interoperability with newer systems.

The strike fighter wing, headquartered at NAS Lemoore, ensures that each squadron is fully combat-ready to conduct carrier-based, all-weather, attack, fighter and support missions for the Pacific Fleet.

Campbell has military ties with family members who have previously served and is honored to carry on the family tradition.

“I am a descendant of a World War II vet that was in the Army,” said Campbell. “A lot of my family serves in various branches. I am the only one who serves in the Navy.”

With the CSFWP consisting of more than 20 squadrons, highly specialized jobs range from training new aviators to maintaining airframes and engines, to handling and flying aircraft.

As a member of one of the U.S. Navy’s most relied-upon assets, Campbell and other sailors know they are part of a legacy that will last beyond their lifetimes providing the Navy the nation needs.

“Serving in the Navy means commitment to excellence and freedom for all,” Campbell added.