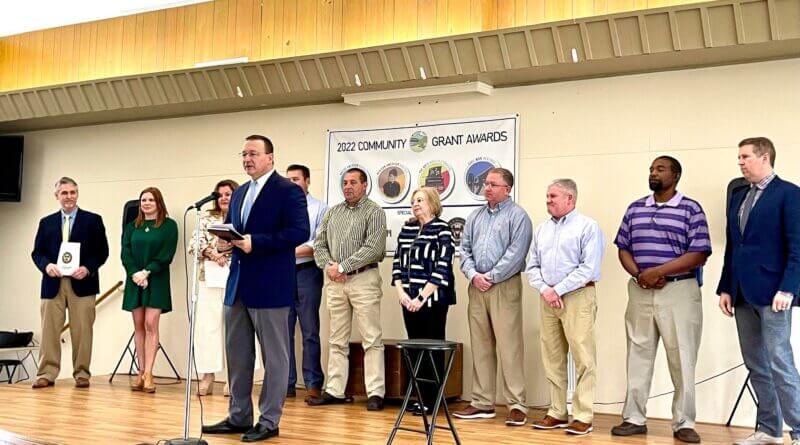 It was exciting day for projects in Tippah County.

After a ceremony announcing over $60,000 in grants to be awarded to Blue Mountain College and Ripley Main Street, plans were announced that Tippah County would be pursuing funding to extend the Tanglefoot Trail from New Albany to Ripley.

The addition to the Tanglefoot to Ripley would add 20 miles to the distance and make it what is believed to be the largest in the state of Mississippi at over 64 miles long.

The proposal presented would have Trailheads at both Blue Mountain and Ripley.

From the Press Release:

The Tippah County Development Foundation, with the support of the Ripley Main Street Association, is taking the next major step toward the development of an extension of the Tanglefoot Trail.

On Tuesday, March 22nd, Chris Lewellen, executive director of TCDF, and Elizabeth Behm, director of RMSA, announced at a gathering in the Paschal Student Center at Blue Mountain College that TCDF has recently signed a contract for professional services related to the preparation of a U.S. Department of Transportation RAISE Grant application. If awarded, this grant would fund the next phase of trail development, a Preliminary Engineering Report.

Lewellen and Behm thanked the Ripley Board of Aldermen, Tippah County Board of Supervisors and Peoples Bank of Ripley for providing the necessary funding for the preparation of the grant application and their forward-thinking support of the project. They also expressed appreciation to Pioneer Lines, the owner of the railroad, for continuing to partner on the initiative.

The proposed extension would be, at least in part and perhaps in its entirety, a “rail with trail” and run adjacent to the rail line and Highway 15 from downtown New Albany approximately 20 miles north to downtown Ripley. It would pass through the Town of Blue Mountain, home of Blue Mountain College.

College President Dr. Barbara McMillin, a member of the TCDF Board of Directors, said, “This trail could be a new economic driver for our county and provide outstanding recreational and wellness opportunities for our students, visitors and area citizens alike. We are fully committed to helping this project become a reality.”