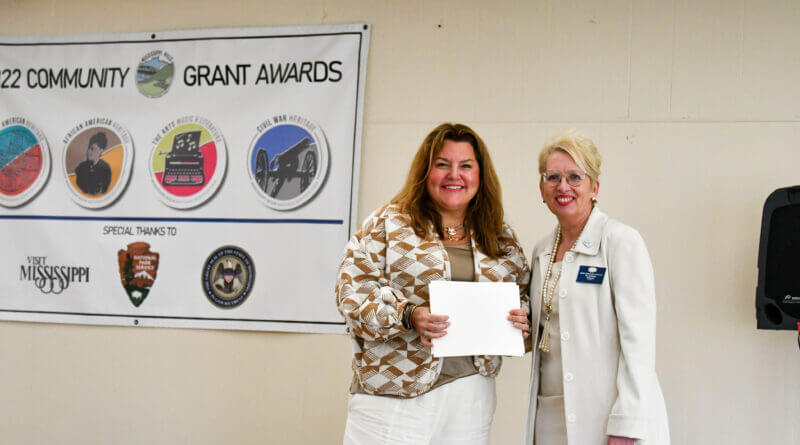 The Mississippi Hills National Heritage Area awarded over $300,000 in grants to North Mississippi organizations at a ceremony held at Blue Mountain College on Tuesday.

Below are some details about the awards ceremony and some pictures from the event.

MHNHA had $305,550 available to award, and based on the recommendations of its
independent grant review committee, the board of directors approved 34 requests to 28
organizations from 17 counties, with $301,484.50 in total awards.

Seven requests totaling $44,690 were not funded due to a weak connection to MHNHA
goals & objectives/mission, other concerns or lack of funding.

Twelve applications totaling $108,735 were received from eight area Main Street
programs. Nine of these requests, totaling $63,735, were awarded. Three proposals
totaling $45,000 were selected to be funded under a partnership with the Mississippi
Main Street Association and thus not awarded as grants. Combined with an additional
$23,000 in funding for MMSA projects, total funding for Main Streets is $131,735.

Here is a breakdown of each organization that received funding.

The Prairie Belt Blues Foundation has been awarded $4,650 for its “Praisin’ the Blues”
performance series.

The City of Hernando has been awarded:
 $5,000 to support cultural and heritage components of its “Dickens of a
Christmas” Victorian-Era holiday event, and
 $5,000 for a new mobile app that will highlight local cultural sites and help
promote the Dickens event.

Lafayette County
 The City of Oxford has been awarded $20,000 for renovations to Cedar Oaks (1859),
a Mississippi Landmark.


Yoknapatawpha Arts Council has been awarded $15,000 to preserve 130 hours of
fragile reel-to-reel field recordings made by folklorist and scholar David Evans from
1969-1983. These recordings chronicle the secular and sacred music of the African
American communities of Tate, Panola and Marshall Counties, and the preserved
material will be housed at the University of Mississippi Blues Archive when
complete.

Tupelo CVB has been awarded:
$20,000 for a mural by premier muralist Brian Tull which will be painted on the
east side of the historic Tupelo Hardware building and become the 19th mural on
Tupelo’s Mural Trail. Rendered in Tull’s nostalgic and photorealistic painting
style, the artwork will celebrate the arts in Tupelo along with its Elvis history, and is being coordinated by the GumTree Museum of Art as part of their 50th anniversary celebration of the GumTree Art & Wine Festival.

$11,750 to design and produce the Elvis’ Tupelo Driving Tour brochure, which
will then be translated into German, French, Spanish, Dutch, Italian, Portuguese,
Chinese, and Japanese. The tour takes visitors to 14 locations that were influential
in Elvis’ life growing up in Tupelo, and currently non-English-speaking
international travelers are not able to experience this interpretive journey. The
brochure will also include information about the Elvis Guitar Trail, Elvis Murals
and Tupelo Elvis Festival, which will encourage extended stays.


The Gumtree Museum has been awarded $5,000 for its Gumtree Festival Singer
Songwriter Musical Showcase, which will highlight the Mississippi Hills’ rich
musical traditions while encouraging the next generation of regional artists.


The Dancing with the King program in Tupelo has been awarded $5,000 to provide
participants with scholarships and informative tours of local Elvis-related sites.


Saltillo Main Street has been awarded $5,000 for its “Paint the Town” Historical
Mural Project.


Columbus Cultural Heritage Foundation has been awarded $10,000 for its Lighting
Downtown Columbus project.

North Mississippi Hill Country Picnic, Inc. has been awarded $5,000 to support
the production of the two-day 2022 picnic, which showcases Hill Country Blues.
(This year’s spectacular lineup will be posted on nmshillcountrypicnic.com.)


North Mississippi Roots and Wings has received $2,500 to support “Faith, Love,
Pride,” a nine-day series of workshops, performances and displays that will highlight
the rich history and culture of the region’s African-American communities, as well as
their contributions to and impact on the broader culture.
Marshall County Total: $17,500

Aberdeen Visitors Bureau has been awarded $4,000 to support its “Paradise Alley Re-
imagination Project” in their downtown district. The alley is an official stop on

Aberdeen’s Black History Driving Tour and was historically referred to as Paradise Alley
by the African-American community during the time when black patrons were only
permitted entrance into business establishments through separate entrances. The history
and vitality of this space will be captured in a heritage mural as well as a pop-art-style
mural, and through these and other enhancements it will once again become a vibrant
community gathering spot.

Montgomery County
Action Communication & Education Reform in Duck Hill has been awarded $5,000 to
assist with the placement of multiple Tourism Trail Markers, an ongoing project which documents and preserves the rich cultural heritage of Duck Hill as well as the African- American experience in Montgomery County. This project will place three historical markers dedicated to the Mule Train, a protest caravan that was part of the Poor People’s Campaign, with the markers being located in Duck Hill, Winona and Kilmichael.

Starkville CVB has been awarded $20,000 to develop exhibit space in the lobby of the
Greater Starkville Development Partnership office building, which is located in
downtown Starkville and serves as the city’s welcome and visitor information center.
The CVB is partnering with MSU Libraries to feature artifacts from each of the
library’s four museums: the Ulysses S. Grant Presidential Library, the Frank and
Virginia Williams Collection of Lincolniana, the John Grisham Room, and the
Charles H. Templeton, Sr. Music Museum. Information about the museums will be
prominently displayed to encourage visitors to explore these attractions.


Mississippi Heritage Trust has been awarded $5,000 to provide supervised
internships for college-level students in the field of historic preservation, in particular those undertaking coursework in the Historic Preservation Masters of Fine Arts program in the College of Art, Architecture and Design at Mississippi State University.

The Mt. Zion Memorial Fund has been awarded $3,550 to fund the R.L. Boyce Picnic
2022, a three-day workshop hosted by this renowned Hill Country Bluesman and
featuring a guitar and fife-and-drum workshop, a cane-fife-making demonstration, free
live music (full lineup to be posted on rlboycepicnic.com), a guided tour conducted by
R.L., and a photo exhibit reception.

 $14,400 to support the renovation of and improvements to the visual-and-music-
arts area of the Pontotoc Town Square Museum (1937). Enhancements will include the addition of a touch-screen display which will allow visitors to learn
more about local recording and visual artists and listen to or view their work.


$3,250 to fund the restoration of a mural from the Walldog Art Era in downtown
Pontotoc. An addition to the mural will honor local Native-American heritage.

Prentiss County
Booneville Main Street Association has been awarded $5,000 to place cast-bronze
plaques on all historic buildings in the Booneville Downtown Historic District, and to
create a companion walking tour brochure featuring these structures.

Ripley Main Street Association has been awarded:
o $20,000 to fund the first phase of the conversion of a unique structure in the city’s
downtown historic district into a multi-use community venue with exterior art that
reflects Tippah County’s Native-American heritage.
o $2,500 to assist with the Alice Mae Blues Festival and the Blue Mountain
Bluegrass Festival.
o $1,085 to fund the creation of an African-American Public Art Quilt Trail, which
will showcase traditional African-American quilt patterns, documenting them
both as works of art and an important means of self-expression.


Blue Mountain College has been awarded:
o $20,000 to fund immediate repairs to the former Lowrey Memorial Baptist
Church building (1908), which was purchased by the college in 2021 and is now a
part of the BMC main campus. The structure is listed as one of the contributing elements in the Blue Mountain College National Historic District and was
designed by architect R.H. Hunt of Chattanooga.
o $20,000 for the creation of an Economic and Community Development Master
Plan for Blue Mountain College and the Town of Blue Mountain, a joint planning
initiative leading up the observance of BMC’s 150th anniversary in 2023.
Tippah County Total: $63,585

Tishomingo County Tourism Council has been awarded $20,000 for improvements to
the lookout area atop Woodall Mountain, the highest point in Mississippi. The first
phase will include cleanup, landscaping and new directional signage. Phase two will
entail the construction of a lookout tower, the addition of an information center, as
well as installation of seating and lighting.


Iuka Heritage, Inc. has been awarded $5,000 for improvements to site drainage at the
former Episcopal Church of Our Savior, a Carpenter-Gothic-style church building
owned and maintained by the grantee.

Union County Historical Society & Heritage Museum in New Albany has been awarded
$15,000 for the design-development phase of the Creative Spirit Exhibit, which will
feature area writers, artists and musicians such as Nobel Laureate William Faulkner,
blues musician/songwriter Sam Mosley, “gospel blues” artists Rev. Leon Pinson and
Elder Roma Wilson, a recipient of the NEA’s National Heritage Fellowship. The
resulting plan will detail exhibit features inclusive of interactive components,
specifications required for fabrication and installation, as well as recommendations on
funding and fundraising.

Water Valley Main Street has been awarded $7,500 to assist with enhancements to the
Casey Jones Railroad Museum: old crossties will be replaced, new signage and
landscaping added, and improvements made to the railcars. Additionally, museum
photographs will be digitized and new interactive exhibits developed.