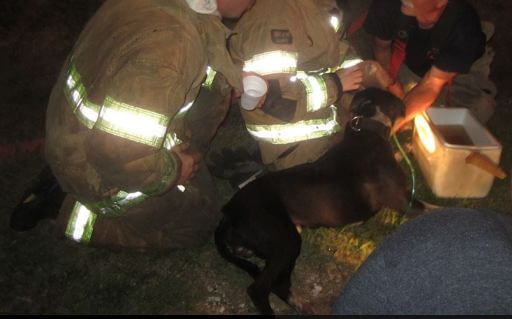 A family pet was named the hero of the night for saving his owners from a house fire.

From New Albany Fire/Rescue on Facebook (picture and story):

New Albany Crews work on a family pet that is credited for alerting its owner who was in the shower at the time of a house fire. The owner was able to escape and also alert his son who was in another room of the house. Unfortunately the bathroom door closed on the pet and trapped it inside the home. Crews rescued the pet and gave him oxygen, cooled him down, gave him water and tended to his needs.

A local veterinarian was notified and the pet was taken to their office. Last reports were the pet sustained some burns also and they were assessing its condition and monitoring it. The pet is the hero of the night.