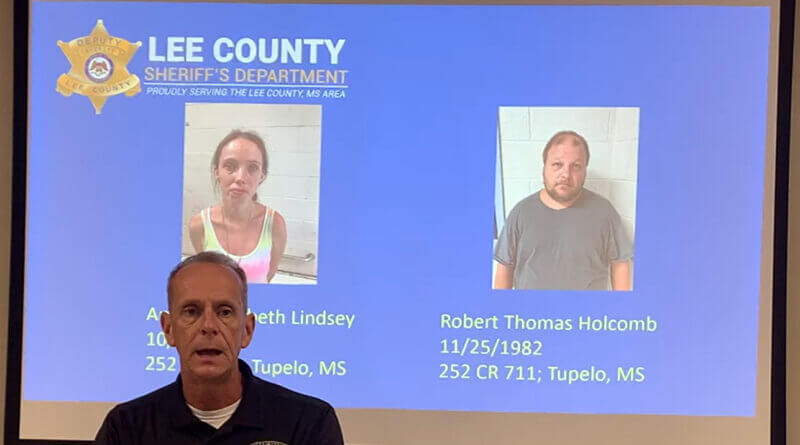 A 5 year old was missing near Tupelo on Thursday for over 12 hours before being found 3 miles away at 10 pm.

This morning, the parents were arrested.

Amber Lindsey and Robert Holcomb were arrested on felony child neglect and drug charges after 4 grams of meth were found today during the arrest.

On July 14, 2022, the Lee County Sheriff’s Department was dispatched to a residence on CR 711 to investigate a report of a missing child. The child was described as a 5 year old wearing green pants, dark color shirt.

The child was last seen in the back yard playing with his two dogs around 1030 on the same date as the report. Multiple jurisdictions responded to help search for the child.

Ground search, water search, and air search were conducted. Area Fire Departments, Law Enforcement Agencies, Search and Rescue Teams, and civilian volunteers searched though out the day and into the night.

Around 10 pm tonight, 911 received a tip of a small child being spotted with a dog in the Green Street, Hwy 45 exit area. We responded and a deputy spotted the dogs near a ditch where the child was found. The child was alert, wet, and dehydrated. Medical personal attended to the child and transported him to NMMC for observation purposes.

I can say the child was alert and responding with personnel attending to him prior to being transported. CPS was contacted and is currently working the case from a placement end. I can assure you that my office will exhaust all means to hold responsible anyone that acted in any Criminal way that resulted in this child being found almost 3 miles from home.

I want to personal extend my thanks to all Law Enforcement, Lee Communications, Fire Departments, Search and Rescue Teams, private citizens, and media outlets that assisted in this search. Thank you to the public for helping share the information that resulted in finding this child safely. Thank you to the many prayers that were offered. Finding this child safe was our goal and we are thankful it was accomplished.