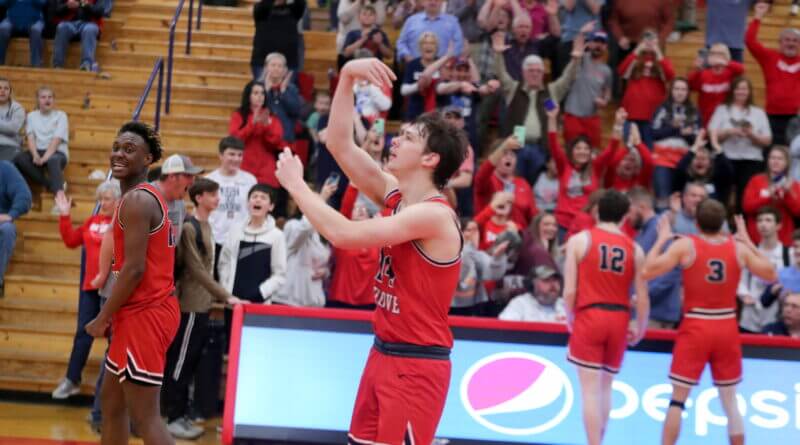 Pine Grove played for the district title for the third straight season on Friday night.

As the saying goes, two out of three ain’t bad.

The Panthers scrapped and clawed their way to the 1-2A title, their 2nd district crown in the alst three seasons, with a come from behind win over an ultra competitive Baldwyn squad by a score of 51-43.

Pine Grove started out hot, building an early lead behind a pair of Jack Hudson three pointers and stifling defense on the Bearcats. Pine Grove led 14-9 before Carson Rowland and Hudson had to go to the bench with a pair of fouls each.

Panther coach Jake Walker just relied on the next man up to weather the storm.

Kollin Derrick, Ty Seawright and Baylor Bryant each had to play meaningful minutes and each contributed to the Panther team effort, holding the fort down despite just 4 points in the second quarter. Baldwyn took a 24-18 lead in to the break.

The third quarter saw the return of playoff mode Jack Hudson, though, as the Junior sniper knocked down a trio of three pointers in the quarter. The Junior squad of Hudson, Jamas Cox, Ty Seawright and Keaton Wilkerson provided all of the scoring in the third period as the Panthers retook the lead 40-38.

Hudson started off the scoring in the fourth period with another triple and from there, it was all Carson Rowland.

The Senior standout connected on 8 points in the final frame, knocking down four free throws late to ice the game and the Panther victory.

Pine Grove is ensured at least one more home game and will play at home so long as they continue to win for the duration of the playoffs.They are at home Tuesday against Myrtle.