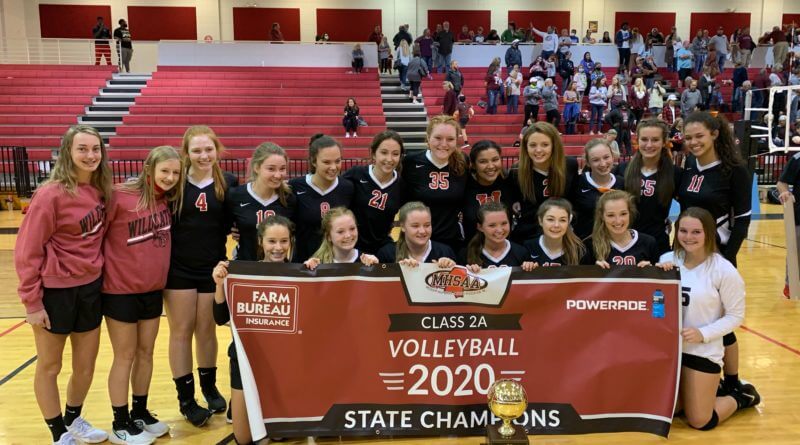 First for the first time, a Tippah County high school volleyball team has won a state championship, as the Walnut Lady Wildcats rallied for a 3-2 Class 2A title victory over Puckett in the final match at Clinton High School on Saturday, Oct. 24.

Walnut took the early lead in the first set, but Puckett rallied for a 8-3 that forced coach Kelley Hopper to call a timeout.

The Lady Wolves continued the first set push to a 15-8 margin after a long serve by Walnut, but that’s when the Lady Wildcats ralled with the eight points for a 16-15 Walnut lead.

The battle went back and forth until Pucket took a 21-17 edge and fought off the Lady Wildcats for a 25-21 set one win.

The second set was reflective of the match as a whole with no team holding more than a two-point lead through the first 22 points of the set. Puckett coach Corinne Mann called a timeout when Walnut forged a 12-10 lead and the Lady Wildcats took a 13-10 edge before the Lady Wolves came back to tie the set at 13-13.

An ace by Walnut sophomore Madison Porterfield gave the Lady Wildcats a 17-14 edge but Puckett came back again to knot the set at 18-all.  Walnut would control the remaining points of the set, which featured a pair of aces from Claire Leak and the match was evened out after a 25-20 set win.

The third set again was close through the first 12 points at 6-6, but Walnut would get a three-point run that forced Puckett into a timeout trailing 6-9. The break didn’t seem to faze the Lady Wildcats, however, as they grew the lead to 16-9 and Puckett needed another timeout.

The lead increased more in the third set for a kill giving Walnut a 21-10 edge on their way to an eventual 25-14 set victory.

Points continued to be exchanged until Puckett got a lead of 20-18 after an ace by Ansley Allen, which led to the eventual 25-21 victory.

Heading into the final set, Hopper told her team to “keep pushing and keep fighting.”

“When we let up, that’s when errors happen,” Hopper explained. “That’s what happened in the fourth set, we let up and errors started to happen.”

Walnut quickly took control of the deciding set with a six-point run to start off. A shot into the net by the Lady Wolves gave Walnut a 12-4 edge and while the Lady Wolves made a brief comeback, Walnut scored the final point of a 15-8 match point.
Hopper called it a “great battle” in the championship march.

“I thought both of our teams adjusted to each other pretty well throughout the whole entire game,” Hopper said “Sometimes it comes right down to the wire and we have played so many games that came down to the wire, so this wasn’t unfamiliar to us.”

Walnut has victories over St. Joseph, East Webster, and a five-set win over Mantachie in the North Half Championship. Puckett got to the championship match with straight-set victories each over St. Patrick, Union, and East Marion.