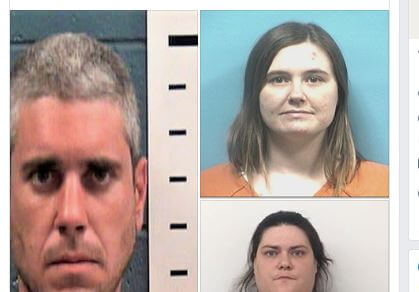 In June of 2017, the Booneville Police Department began investigating the disappearance of then 17-year-old Angelica Dykes. She was reported missing from Booneville by her family. The investigation continued until she was turned over to law enforcement in Alabama in December of 2017. Federal officials from the Department of Homeland Security became involved in this case at that time.

The Department of Justice, U.S. Attorney’s Office, Northern District of Alabama released the following statement regarding the events which transpired as a result of the investigation into her disappearance.

United States District Judge L. Scott Coogler sentenced Kenneth Earl Hooks, 36, of Prattville, to 120 years and 2 life sentences to run consecutively and Sarah Pauline Morris, 28, of Shelby County, to 197 months for producing child pornography and enticing a young child to engage in sexual activity for the purpose of creating obscene images. Hooks pled guilty to these charges in February 2019 and also to the additional charge of transportation of a minor for sexual purposes. Morris pled guilty in March 2019.

“This sentence very clearly reflects the seriousness of these child predator’s disgusting crimes,” Town said. “Our justice system will not tolerate these criminals who prey on innocent children. They will now occupy bed space that has been reserved for them in a federal prison.”

“The sentencing of Hooks and Morris brings justice to two serial offenders who preyed on societies most vulnerable,” said HSI Special Agent in Charge Nick S. Annan. Their self-described “Bonnie and Clyde” crime spree included depraved acts of abuse and violence and would have undoubtedly continued without fantastic case work of the agents involved in this investigation. “It is important to understand that the production of child pornography is simply the filming of child rape.”

Police in California found Hooks and Morris living in a desert area on the southern tip of the state after locating a red Mitsubishi Montero with an Alabama license plate there, according to a May 4, 2018, federal criminal complaint and arrest affidavit issued for Hooks in the Northern District of Alabama. According to the affidavit, the red Mitsubishi was registered to Morris and police were searching for it because security cameras at a Walmart in Brawley, California, caught her driving it on March 30, 2018, when security officers at the store reported Morris attempting to film two young girls in a bathroom stall.

According to court documents, as a result of further investigation, child pornographic images were discovered on a laptop that had been subjected to forensic examination by law enforcement officers in Imperial County, California. On or about April 27, 2018, agents from the Department of Homeland Security in Birmingham received these images which depicted sexual exploitation of 2 prepubescent children and a teenage female under the age of 18 by Hooks in Alabama. During the investigation, agents learned that Hooks had transported the teenage female victim from Mississippi to Alabama with the intent of sexually assaulting her and recording it on video.

Our agency investigated allegations against Angelica’s mother, Dana Maria Morgan, 37 of Booneville, that she was directly involved in the disappearance of her daughter until she was arrested in Batesville, MS on 08/01/2018 and transported back to Booneville to face charges of hindering prosecution and contributing to the physical/sexual abuse of a child. She has been indicted by a Prentiss County grand jury and remains in custody at the Tishomingo County Jail where she is awaiting trial.as of this release. She is accused of intentionally misleading law enforcement as to the whereabouts of Angelica during the time she was missing and obstructing our investigation into her disappearance. She is also accused of sending Angelica out of state with Mr. Hooks and aiding him in concealing her from law enforcement until she was located in December.

“I am very satisfied with the sentences imposed on the two defendants in Alabama after everything Ms. Dykes endured. Now, with her mother awaiting trial here in Prentiss County, I hope to see her convicted for the role she played in this case and I hope she will receive a sentence comparable to those imposed in Alabama. Innocent children rely on their parents for protection. Hopefully, justice will soon be final in this case and all of the victims can put it behind them.”