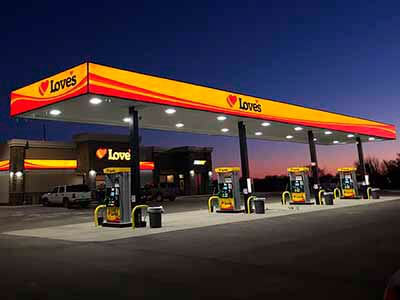 If you believe competition will bring lower prices, hold on to your wallet: one of the largest travel center companies in America is coming to Walnut according to officials with the town of Wanut as reported by the Southern Sentinel earlier today.

Loves is putting one of their Travel Centers on Highway 72 near the Dollar General in Walnut. According to the Town of Walnut:

This morning, Town of Walnut administration, utility personnel, police and volunteer fire department members met with representatives of Love’s Travel Stops as they presented the Town with the initial site plan for their development to be located on Highway 72, just west of the Highway 15 intersection. This project will break ground soon with plans to be in full operation in 2019.To all that have worked toward bringing these opportunities to our town, we say “Thank you”.

Love’s Travel Stops & Country Stores (Love’s) is the nation’s industry-leading travel stop network with more than 470 locations in 41 states. Founded in 1964 and headquartered in Oklahoma City, Oklahoma, the company remains family-owned and operated and employs more than 22,000 people.