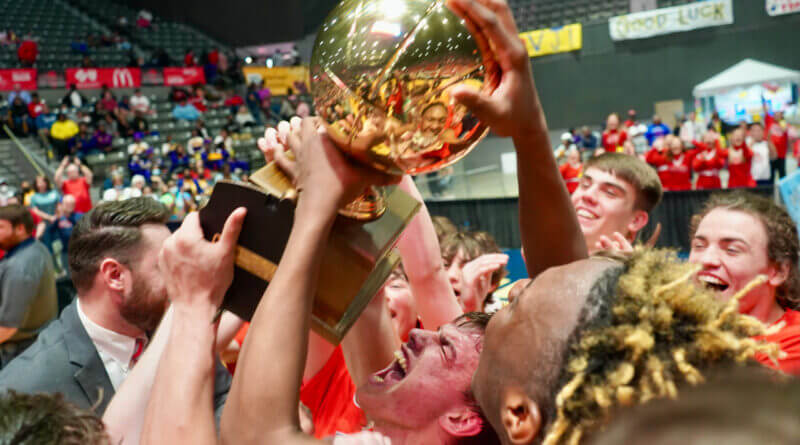 Pine Grove won a championship on Friday, their first boys state title since 1977 with a 43-39 win over Velma Jackson. It was an instant classic years in the making.

The Panthers have learned patience over those 45 years since their last title. Decades of players coming through, looking at the names that came before them. Wanting to get to the Big House and immortalize their names on the walls of the gym at the Grove.

The years kept adding up, and so did the hours.

Hours in the gym, shooting all hours of the morning or night. Building chemistry, crafting their game both individually and as a unit.

These Panthers moved as one unit on defense against a patient and stellar Velma Jackson team, holding them in check all night.

There were big plays and big performances that led to this moment. The Fantastic Five Pine Grove starters played every second.

Jamas Cox took three charges, handled the post, collected 5 rebounds and hit all 6 of his shots and 3/4 free throws for 15 huge points on top of his designation as the crowd hype man.

The Panthers needed a spark in the second half and Keaton Wilkerson drilled a three pointer to get the Panther faithful, the Sea of Red in all of its glory, on their feet.

Hayden Holcombe didn’t get into the scorers column, but he collected 5 key rebounds, all elbows and long arms and wiry frame creating havoc on defense to the tune of a pair of steals and two deflections.

Jack Hudson, who has scored over 1,200 points in his career and is a well known assassin from deep, didn’t collect his first points until they were in the games biggest moment, catching a 3/4 length pass from Carson Rowland and taking it for a layup that proved to be the clenching score. Hudson provided cool confidence, never getting rattled while looking for ways to impact the game in any way possible.

And then there is the Senior leader, Carson Rowland. Rowland was given the game’s MVP with 23 points, 7 rebounds and 5 assists.

He made play after play, making passes and scoring in the paint and on pull up jumpers, at the three point line and on free throws.

Rowland went over 2000 career points on Friday. Another milestone in an unbelievable career that ended with him and his team lifting the Gold Ball.

The Panthers found themselves in a dogfight for all of the marbles. They hadn’t trailed in the playoffs until early in the first quarter of the state championship game and Velma Jackson held the lead until a Rowland bucket in the fourth quarter.

Coach Jake Walker and Katie Bates now have 5 rings together in the last six years. The Grove and the Big House are practically synonyms and now the boys have joined in on the fun of a championship crown.