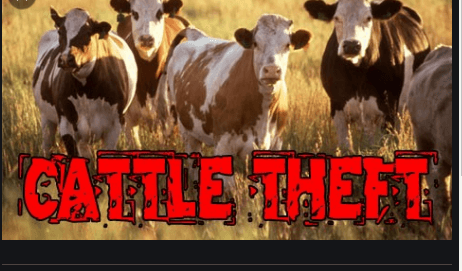 A pair of North MS men have been arrested and charged with stealing cattle from a farm in Benton County.

Wyatt Lyn Abbott, age 23, of Myrtle, Miss., and DeJames Bolden, age 24, of Ashland, Miss., were charged with the thefts.

On October 9, 2019, a Benton County cattleman contacted MALTB, the law enforcement division of the Mississippi Department of Agriculture and Commerce, to report a lock had been cut from his gate and an undetermined number of cattle were stolen from his pasture in the northern area of the county during the night. On October 13, 2019, at least four expensive show cows were stolen from another farm located near Hickory Flat in southern Benton County.

“I commend the efforts of the Mississippi Agricultural and Livestock Theft Bureau and the Union County Sheriff’s Office in solving this case, and I am glad the cattle taken were recovered and returned to their rightful owners,” said Commissioner of Agriculture and Commerce Andy Gipson. “For our cattle farmers and ranchers, their cattle are their livelihood. We aim to make sure modern day cattle rustlers are tracked down, arrested and prosecuted,” Gipson continued.

Each suspect posted a $20,000 bond and has been assigned a court date. Bolden is currently on parole from the Mississippi Department of Corrections for previous charges. The investigation is ongoing to determine if additional suspects were involved in the crimes. The suspects had no connection or association with the two victims. The cattle appeared to be randomly selected by the suspects. Three of the cows were recovered from a farm in Tennessee, and the other four were recovered from a Union County farm.